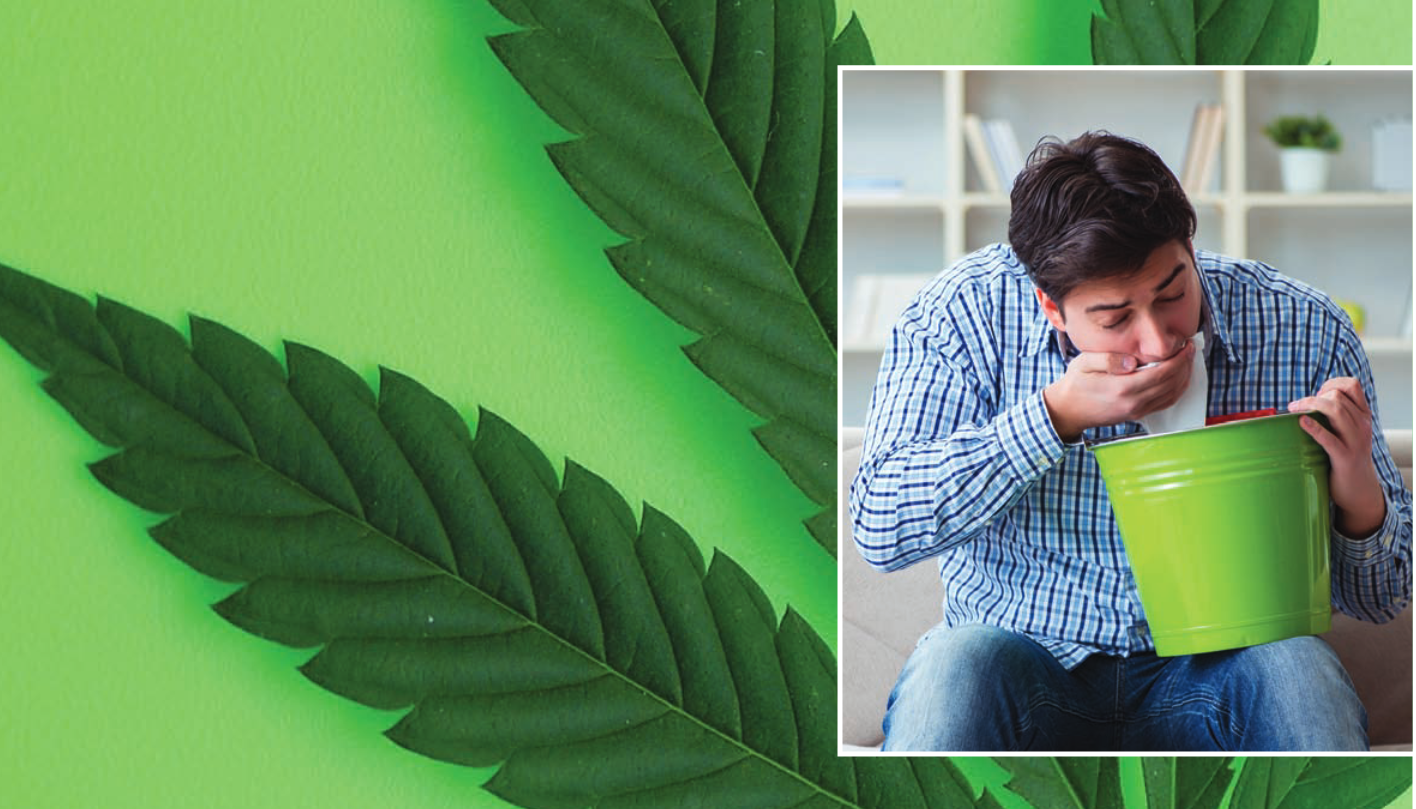 An overview of an unpleasant and even dangerous condition that has recently (on the scale of medicine) been singled out as a separate diagnosis and can affect anyone who regularly consumes cannabis.

CHS is not very well known. An emergency department physician in 2018 commented that the condition wasn't on their "radar" in the 5 years prior, though the condition was being diagnosed more often now. Many people are surprised by the notion that cannabis can induce symptoms of nausea and vomiting, given the fact that cannabis is used to prevent nausea and vomiting. The portmanteau "scromiting" (scream + vomiting) has been used as a common name for the condition.

Delayed diagnosis prolongs suffering and is the cause of multiple hospital admissions and unnecessary expensive investigations, such as radiating imaging, endoscopies, and even exploratory laparoscopies. CHS may portend serious complications such as acute renal failure, electrolyte disturbance, skin scalds, or intestinal pseudoobstruction. Fatalities caused by CHS, probably associated with electrolyte disturbance and dehydration, have also been reported. Besides health related conditions, CHS and consequent hot water use has been associated with high water bills and wastage.

The diagnosis relies on history. A systematic review by Sorensen et al. identified the main characteristics of patients with CHS:
• Severe nausea and vomiting that recurs in a cyclic pattern over months(100%)
• Abdominal pain (85.1%)
• At least weekly cannabis use (97.4%)
• History of regular cannabis use for >1 year (74.8%)
• Resolution of symptoms after cannabis cessation (96.8%)
• Compulsive hot showers or baths with symptom relief (92.3%)
• Age <50 at time of evaluation (100%)

CHS has three phases:
1. The prodromal phase consists of early morning nausea, fear of vomiting, anorexia, and abdominal pain that lasts for days. Many people increase the use of cannabis during
this phase in the mistaken belief that this will ease their nausea and other
symptoms.

2. The hyperemetic phase is characterized by cyclical bouts of uncontrollable nausea and vomiting, as well as increased abdominal pain intensity and a compulsion to bathe in hot water to relieve symptoms. This pattern of cyclical vomiting can repeat every few weeks or months.

3. In the recovery phase, symptoms resolve. This phase, which occurs when the patient abstains from cannabis, is characterized by a return to normal eating and bathing, as well as the
absence of nausea, vomiting, and abdominal pain. Even with abstention, CHS symptoms may take 7 to 10 days to abate

Different mechanisms have been proposed to explain how, in certain individuals, the established antiemetic properties of cannabis are overridden and CHS develops. Approximately several hundred cannabinoids have been identified, and each potentiallyи contributes differentially to disease mechanisms. One hypothesis suggests that stimulation of enteric cannabinoid receptors 1 (CB1) inhibits gastric and intestinal motility, possibly inducing vomiting related to CHS.

Another hypothesis resides in stimulation of vascular CB1 receptors inducing splanchnic vasodilation. As encountered in late stage cirrhosis, mesenteric congestion could thus contribute to the symptoms. Exposure to hot water redistributes blood flow to the skin and could then explain symptom relief. Based on observational and animal studies, its also suggested that cannabis disrupts the hypothalamic-pituitary-adrenal axis, affecting homoeostasis of digestion and thermoregulation, similar to cyclic vomiting syndrome.

Finally, it has been hypothesised that genetic variations in hepatic drug transforming enzymes, resulting in excessive levels of proemetic cannabis metabolites, may explain the differences in clinical presentations among cannabis users. The type of cannabis is often not specified in publications. However, one observational study, including 2567 patients who presented to an academic emergency department with cannabis related conditions, suggested that CHS was more common in people exposed to inhalable cannabis.

Evidence from a US retrospective study including 1571 patients showed that CHS affects up to 6% of patients consulting for recurrent vomiting in emergency departments. Moreover, among regular cannabis smokers, about one third of them reports hot showers or baths as a means to relieve nausea and/or vomiting. Extrapolating those results to the population of the United States, it is estimated that 2.1-3.3 million people might suffer from CHS annually. In Colorado, which legalised cannabis in 2009, visits to emergency departments for cyclic vomiting doubled after legalisation. An estimated 182 million people worldwide were cannabis consumers in 2013, increasing
to 192 million in 2016, therefore CHS may represent an important diagnosis to consider in any patient consulting for recurrent vomiting.

The only long term effective therapy is cannabis cessation, with complete and permanent resolution of symptoms within the first two weeks after cannabis weaning.

Immersion into a hot bath or shower relieves symptoms in minutes, with increased relief corresponding to higher water temperatures. Some patients have reported spending more than half of their day bathing, even waking from sleep to shower. The effectiveness of bathing is poorly understood. As CB1 receptors are located near the thermoregulatory center in the hypothalamus, however, it has been hypothesized that they play a role in intestinal vasodilation and body temperature regulation.

Capsaicin has also been described as an inexpensive, readily available, and safe treatment for CHS with reasonable efficacy. Capsaicin is theorized to activate the TRPV1 G-protein–coupled receptor, which interacts with the endocannabinoid system.

The suggested regimen described is topical application of 0.075% concentration capsaicin cream to the patient’s abdomen or back of arms 3 times daily, keeping caution to avoid sensitive areas of the face, eyes, nipples, and perineum.

The applicator should wear nitrile gloves when applying the cream and wash their hands afterward. The patient may experience initial discomfort, and the adverse effects may include local burning, itching, redness, and swelling, especially if higher doses are used. If there is excessive irritation, washing the skin with soap or alcohol is more effective at removing the capsaicin than plain water. Many hospitals carry this product on formulary, and it can be either found in the automated dispensing machines in the emergency department or be obtained from the inpatient
pharmacy. 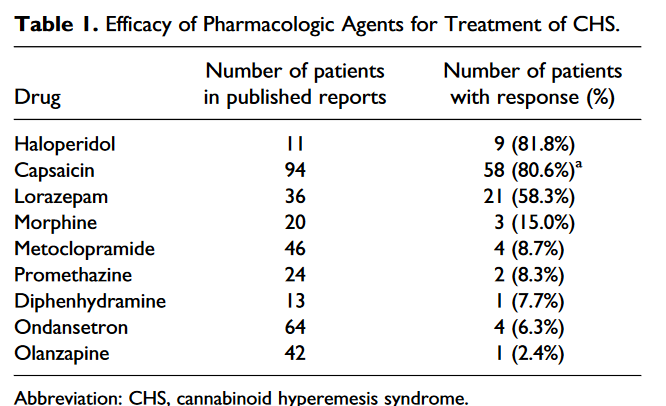 Symptomatic treatment has been attempted, but patients respond poorly to many common antiemetic therapies, such as promethazine, metoclopramide, and ondansetron, as well as to nontypical agents, such as benzodiazepines and olanzapine.

Antidopaminergic antipsychotics such as haloperidol and droperidol have been found to be moderately successful in controlling symptoms during the hyperemetic phase. A recent retrospective review found that CHS patients treated with droperidol had less than half the length of stay compared with those treated with conventional therapies. It has been shown that delta-9-tetrahydrocannabinol increases dopamine synthesis, turnover, efflux, and cell firing, which may explain the mechanism of the success of this class of medications. Typical dosing has been suggested to be 5 mg intravenous or intramuscular of haloperidol and 0.625 mg to 2.5 mg intravenous droperidol. A potential adverse drug effect includes QT prolongation, which has been reported in both agents. The risk for QT prolongation typically occurs with intravenous administration and with quantities exceeding that of the recommended dose. These pharmacological approaches may be helpful in the phase to alleviate the gastrointestinal symptoms and pain, but they are not meant to become long term treatments as they themselves portend serious side effects.

Other treatments may include proton pump inhibitors for gastritis and fluid resuscitation to correct fluid and electrolyte imbalances to prevent end-organ damage or arrhythmias, respectively.

Finally, most authors recommend avoiding opioids for pain relief, which can worsen the nausea.

The prognosis is generally good as long as the diagnosis is made early and the patient commits to cannabinoid cessation. The morbidity associated with this disease is related to poor control of symptoms due to ongoing cannabinoid use and frequent hospitalizations.

As always, thank you for your time.
I invite everyone interested in the topic to a dialogue.
If you have encountered a similar phenomenon, please describe your experience.
D

Almost 100% sure my wife has this condition.Its hard to bc we love our noids

dirtyred, in such a case, it is necessary to take measures!​

dirtyred, in such a case, it is necessary to take measures!​

BrainYes my friend
You must log in or register to reply here.