Neurobiology of long-term addiction.
Drug addiction is a really complex and long-lasting pathological process that occurs and continues in the brain and is regulated by various genetic, epigenetic and environmental factors. The most important reproducible discovery in the study of drug addiction was the fact that the abuse of psychoactive substances activates the mesolimbic dopaminergic system, which enhances both pharmacological and natural sources of the reward system. The mesolimbic system consists of the following structures: dopaminergic neurons (ventral tegmental area), their axons (terminal regions of the adjacent nuclei and the prefrontal cortex).

Psychostimulants, alcohol, nicotine, opiates, THC affect this system, which leads to an increase in synaptic concentrations of dopamine. These substances have specific receptors in certain parts of the brain, the final effect of their action is an increase in dopamine level in the mesolimbic system. It is a well-known fact that the main mechanism of the mediator system is receptor-mediated activity. Chemical mediators, in this case, are ordinary macromolecules (often proteins) that perform two main functions: recognition and transformation (transduction). Accordingly, each receptor will have two domains: effector and ligand binding, there are hydro - and lipophilic sites on the latter, and the binding of the ligand contributes to a change in the structure of the receptor.

One of the most important and generally significant achievements in terms of the study of psychoactive substance abuse was the identification of targets for the main types of drugs, which is the result of numerous works on the development of methods for binding radioligands, studying the biochemical characteristics of drug binding sites, molecular biology of cloning and identification of these structures. Table 1 shows the main types of psychoactive substance and their target receptors.

Psychoactive substances have the ability to both increase and decrease the regulatory properties of receptors (Table 2). These changes, which are carried out through genetic mechanisms, are associated with the development of tolerance to substances and / or withdrawal syndrome. Past research results supported the idea that the localization of the direct cellular effect of psychoactive substances is exclusively homogeneous. However, at the moment, many types of interactions between psychoactive substances and the receptor are known. For example, it was believed that nicotine has a single class of binding centers. Now, it is already known about the existence of many oligomeric receptors that are bound and activated by nicotine.

Both the variety of receptor types and the cross-modalities of interactions between the psychoactive substance and the receptor are becoming more and more significant. Previously, it was believed that the drug use causes changes in specific binding centers, in the mechanisms of inactivation, or in the levels of endogenous ligands. At the moment, the variety of drug receptors urges us to figure out whether there are changes in the structure of the receptor molecule or in the number of these receptors on the neuron surface. Drug abuse also has long-term consequences due to activation of gene expression as a result of drug action.

The cAMP hypothesis. Opioid receptors' activation causes a decrease in adenylate cyclase activity, which leads to a decrease in the level of intracellular cAMP. This was discovered by Shrama (together with other researchers) when they demonstrated a decrease in intracellular cAMP levels after adding morphine to neuroblastoma cell culture. However, with continued exposure, the cAMP level returns to normal, and with the binding of an opioid receptor antagonist, the cAMP concentration exceeds the control values. This showed that resistance and dependence were formed at the cellular level.

Presumably, adaptation processes in the cAMP signaling pathway contribute to the emergence of resistance to opioids and dependence on them. This has been called the cAMP hypothesis of opioid addiction. Chronic opioid exposure caused the induction of adenylate cyclase and protein kinase A, but after the opioid withdrawal, there was a dramatic decrease in the concentration of these enzymes. In addition, it was found that all three types of opioid receptors had undergone the development of resistance. It was also found out that the mechanism of resistance development to kappa receptor agonists consists of disconnection of the receptor from G-protein, mediated by the beta-adrenergic receptor kinase.

Changes in endogenous ligands. Chronic morphine use causes an inhibition response of the endogenous opioids' synthesis, which further leads to opioid addiction and withdrawal syndrome. Opioid agonists have been shown to reduce the expression of proencephalin mRNA.

Alcohol addiction.
GABAergic system. When studying the effects of alcohol on GABA-mediated capture of chlorine ions (CL-) in the “micro-bags” of the brain (isolated fused membranes of brain cells), it was found that the capture of CL - increased. Thus, alcohol could enhance GABA-mediated inhibition of neurons. Each GABA receptor consists of five subunits that form a channel in the center of the complex. Chronic alcohol consumption reduced the function of the GABA receptor, and therefore smaller doses of GABA antagonists were needed to cause seizures. A single intake of alcohol increased the GABA-induced current of CL-in the microcircuits of the brain in mice, but a similar effect did not occur after regular alcohol intake. The results of the analyses showed that regular intake of alcohol by rats led to a decrease in the mRNA level of one of the alpha subunits of the receptor (i.e., alpha 1 subunit), as well as to a decrease in the level of the alpha 1 protein. These data confirm the hypothesis that the development of resistance is associated with a decrease in the number of GABA receptors.

The glutamatergic system. Alcohol reduces the transmission of glutamate in NMDA receptors. It has been observed that the expression of certain NMDA receptor subunits in the cortex is increased in people with alcohol addiction. Deviations in NMDA receptor functioning (assessed by the response to ketamine) may contribute to a subjective response to ethanol intake and increase the risk of developing alcoholism.

The serotonergic system. Low levels of 5-hydroxyindolacetic acid (CSF HIAA) in the liquor are associated with rapid development of alcoholism, aggressive behaviour and high impulsivity. There is evidence that selective serotonin reuptake inhibitors (SSRIs) — citalopram and flucostein — reduce alcohol consumption. The density of serotonin transporters was lower in the alcoholic cortex (in the pericoleal and anterior cingulate cortex). 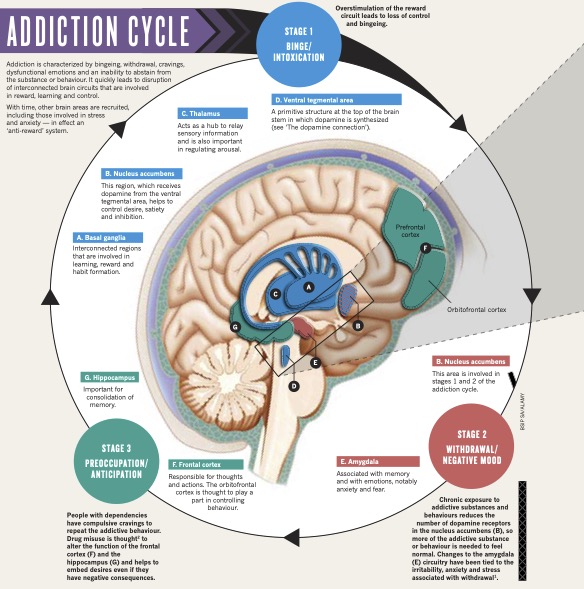 The dopaminergic system. Chronic alcohol consumption was associated with a decrease in the activity of the mesostrial dopaminergic system in rodents and the concentration of dopamine and its metabolites in alcoholic patients. A decrease in the function of the dopaminergic system led to compensatory adaptive changes in D2 receptors (hypersensitivity and an increase in their number). Alcohol-addicted patients who had an early relapse had low levels of dopamine and an increased number of D2 receptors. It was proposed to use this indicator as a biological marker of risk of early relapse in patients suffering from chronic alcoholism. A genome-wide search for associations of neurotransmitter genes polymorphism in European alcoholics showed a significant predominance of polymorphism of the D2-receptor gene (DRD2 TaqI B1 allele).

The endocannabinoid system. Chronic alcoholism leads to a decrease in the number of CB1 receptors of the endocannabinoid system and their signal-conducting system, and also causes an increase in endogenous cannabinoids: arachidonylethanolamide and 2-arachidonoylglycerol. Removal of CB1 receptor blocks voluntary alcohol consumption in rats. Also, CB1 antagonist, SR141716, reduces alcohol consumption among rodents.

The glycine system. Glycine receptors (GlyR) in the nucleus accumbens can act as targets for alcohol when it affects the mesolimbic dopaminergic system. Glycine and strychnine alter the extracellular dopamine concentration in the nucleus accumbens, probably through activation and inhibition of GlyR. Glycine and strychnine mutually affect alcohol consumption among male Wistar rats, which prefer alcohol to a greater extent.

Nicotine addiction.
The cholinergic system. Nicotine affects nicotine-dependent cholinergic receptors. Different combinations of alpha and beta subunits form receptors with different responses to agonists and antagonists. The sensitivity of the receptor to agonists and antagonists depends on the subunits that make up the receptor. When receptors are stimulated by nicotine, they become inactive. Thus, dopaminergic stimulation of neurons of the mesolimbic system stops quite quickly after exposure to a low concentration of nicotine. Consequently, the effects of nicotine are self-regulating, and its effect on behavior is not as pronounced as that of cocaine. The number of binding sites changes with constant use of nicotine. When nicotine exposure is discontinued in rats, adenylate cyclase is activated in the amygdala. Adenylate cyclase activity is stimulated by the calcium-calmodulin system (same as in the case of opioid and cannabinoid withdrawal).

The opioidergic system. 24-hour abstinence from taking nicotine caused a significant increase in the preproencephalin mRNA level in the hippocampus and striatum. With prior administration of mecamylamine to rats, these effects were blocked. It is assumed that the opioid system of the brain is involved in transmission of nicotine signal and in occurrence of withdrawal syndrome. 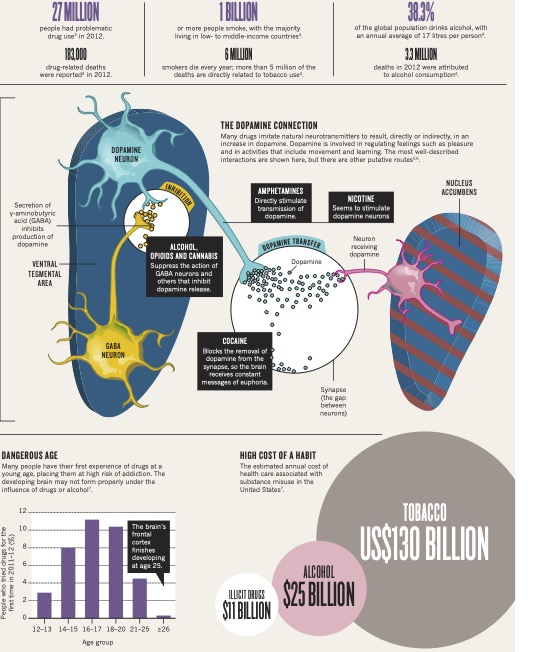 Effect on the transcription factor FosB. Overexpression of FosB increases sensitivity to the loco motor effect of cocaine and morphine, as well as to the reward system. In addition, spontaneous use of cocaine increases and the incentive to search for it increases.

Cannabinoid activity
Cannabis affects the cannabinoid receptors CB1 (central) and CB2 (immune cells). CB1 receptors inhibit adenylate cyclase and calcium channels, activate potassium channels and mitogen-activated protein kinase. Acute effects of cannabinoids and the development of resistance are mediated by receptors associated with G-proteins. To study liver metabolism with resistance to delta-9-tetrahydrocannabinol, SKF-525A (microsomal enzyme inhibitor) or phenobarbital (microsomal enzyme enhancer) were administered before laboratory animals. The obtained data allowed us to assume (but not definitively demonstrate) the metabolic mechanism of the resistance development. It was found that lithium prevents cannabis withdrawal syndrome (increased expression of Fos proteins in oxytocin-immunoreactive neurons, as well as an increase in the expression of oxytocin mRNA and the concentration of oxytocin in peripheral blood). The effects of lithium weakened with the systematic preventive administration of oxytocin antagonists. The discovery of the molecular mechanisms of drug addiction has led to identification of ligands that can be reliable options for treatment (Table 3).

Conclusion.
The main final mechanism of narcotic drugs action is associated with dopamine in the limbic system. Constant drug use leads to molecular changes in many neurotransmitter systems, and, thus, various neurotransmitter systems are involved in the development of addiction to a particular drug. The study of the neurobiological basis of addictive processes allows us to better understand the existing pharmacotherapy and will lead to the development of new and more effective methods of treatment in the future.
​
Last edited by a moderator: Dec 6, 2021
You must log in or register to reply here.
Top