This article is more than 2 years old
Click to expand... 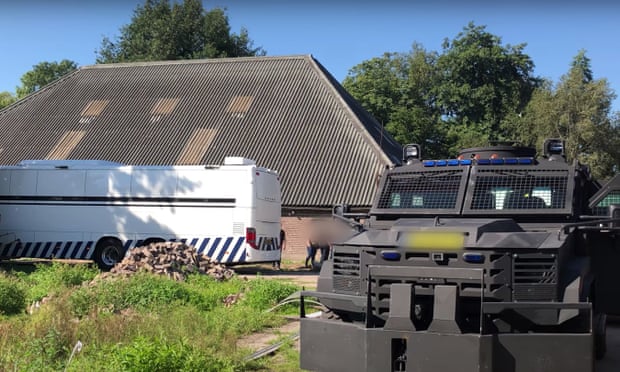 At least 17 people are in custody in the Netherlands after police raided a former riding stables that had been transformed into the country’s largest ever illicit drugs “laundry” capable of producing up to 200kg of cocaine a day.

Thirteen of those detained were Colombian nationals, police said on Tuesday. Three Dutch citizens – including the 64-year-old owner of the stables, in the northern village of Nijeveen – and one Turkish suspect were also arrested.


Tens of thousands of litres of chemicals were seized, along with equipment such as barrels, jerrycans, plastic tubing and five cement mixers used to extract the cocaine from so-called “carrier material”, such as clothing, that had been impregnated with the drug before being exported to the Netherlands.

“This is the largest cocaine laundry ever found in the Netherlands,” the police chief André van Rijn said in a statement. “Given the number of people who worked there, the size, the layout and the equipment, we estimate the production capacity at 150kg to 200kg of cocaine per day, representing a street value of €4.5m-€6m [£4.04m-£5.39m] uncut.”

Police also found sleeping quarters for workers in the stables, about 75 miles (120km) north-east of Amsterdam, and recovered 100kg of cocaine base. After searches at storage sites in the nearby towns of Apeldoorn and Elshout, about 120 tonnes of carrier material was also seized.

The suspects are due to appear before a judge this week and more arrests remain possible, police said.

According to the Dagblad van het Noorden newspaper, several dozen heavily armed police used a Bearcat armoured personnel carrier and a surveillance helicopter in the operation, which happened early on Friday but was announced only on Tuesday. 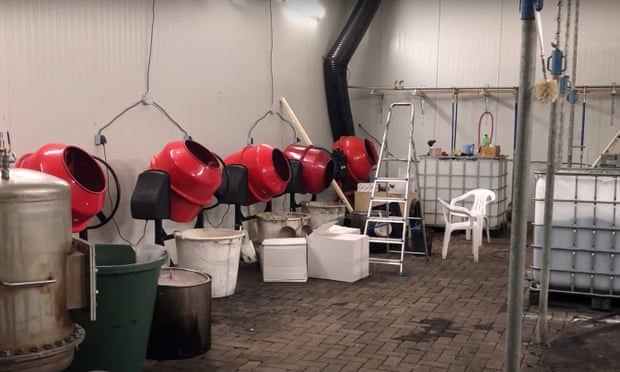 ‘This is the largest cocaine laundry ever found in the Netherlands,’ police said. Photograph: Politie Landelijke Eenheid
The paper said the owner of the former stables and riding school had been registered as a horse dealer and breeder at the chamber of commerce since 2001, although locals said they had thought the company’s business was recycling old computers.

The unnamed man lived in another building on the site with his 92-year-old mother, the paper said, and was frequently seen out and about in the usually sleepy village. He appeared “perfectly normal”, neighbours told the Algemeen Dagblad newspaper.

Neighbours said the owner’s mother was not among those arrested. “She has been shattered by the whole thing,” one man, who did not want to be named, told Dagblad van het Noorden. “But she’s in good hands now. I really can’t say any more; this is hard enough for her already.”

The Dutch customs service said last month it had seized twice as much cocaine in the first six months of 2020 as in the same period last year, with more than 25,000kg of the drug confiscated between January and June. Rotterdam, Europe’s largest port, and nearby Antwerp in Belgium are the two main hubs for the continent’s drug trade.
You must log in or register to reply here.
Top