People who abuse psychoactive substances are at an increased risk of developing metabolic disorders and diabetes. That is due to increased indirect cell damage caused by metabolites of the substance, due to dysfunctional changes in the secretory apparatus of b-cells, and partly due to the appearance of endothelial dysfunction that occurs in patients with present arterial hypertension when using mephedrone, leading to structural and functional changes in the vascular wall. In a recent study conducted in Spain, it was found that 21% of 253 episodes of ketoacidotic diabetic coma were associated with the use of psychoactive substances (MDMA, amphetamine, cocaine). Similar results were the case when conducting a prospective study in Australia, where more than 50% of young people with diabetes used psychoactive substances, and the most commonly used substance was cannabis, then MDMA, etc.

There are cases of diabetic ketoacidosis with a fatal outcome in people with type 1 and type 2 diabetes; naturally, for patients suffering from type I diabetes, the use of almost any psychostimulants can lead to serious consequences or even death, when, as with type II in a compensated state, the risk of severe pathological conditions with the same dose is significantly less, which is the reason for giving this problem great relevance and conducting studies aimed at studying the course of type II diabetes with mephedrone use and correcting complications associated with its progression. 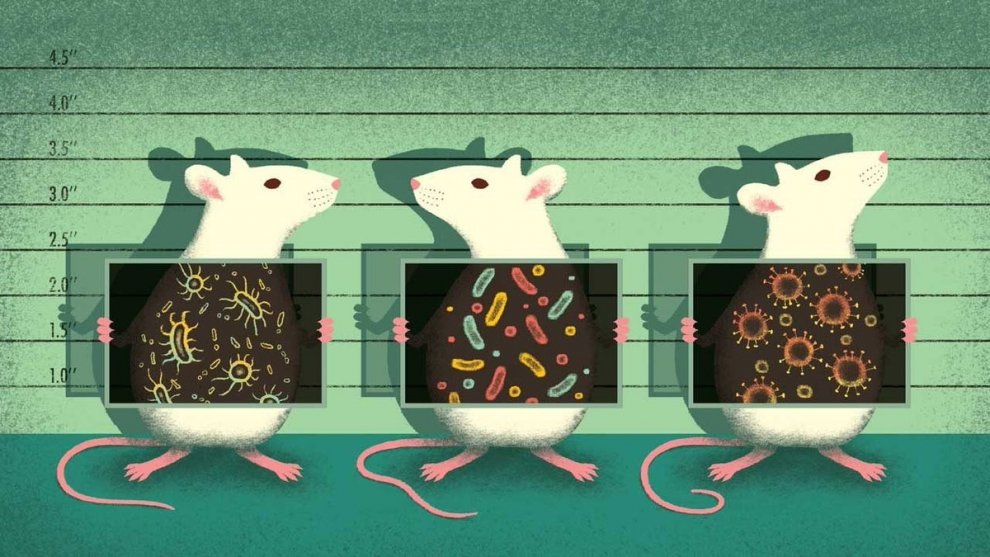 Study objectives.
To study changes in the biochemical composition of blood serum in male Wistar rats on a model of type 2 diabetes mellitus with simultaneous oral mephedrone use, to investigate the effect of hypoglycemic therapy on laboratory parameters. 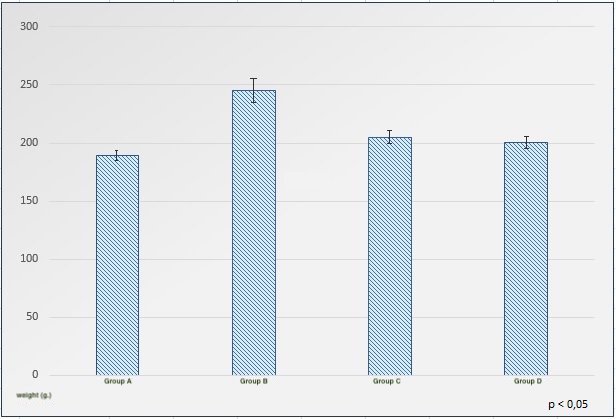 The dosage of dimethylbiguanide was 300 mg/kg. The following indicators were used to identify anatomical and physiological parameters: body length and weight, chest and abdominal circumference. The glycemic profile was monitored by an oral glucose tolerance test with the administration of the glucose at a dosage of 3 g / kg and blood sampling from the tail vein to determine glucose concentrations. The biochemical composition of animal blood serum was determined using standard kits on a semi-automatic analyzer, the following parameters were registered: total protein, total bilirubin, urea, glucose, AST, ALT.

Considering the research of D. Filipps and other scientists, there were no convincing data in the results of the meta-analysis describing a difference in glucose concentrations before and after meals, and also in measurements of glycated hemoglobin in people with diabetes mellitus taking psychoactive substances. However, in the study only MDMA and amphetamines were used, and the frequency of use was not a structurally important part of the descriptive process. In the present study, it was identified that the rats in the group with modeled metabolic disorder and with mephedrone administered intragastrically, wasn't statistically different from other groups, except for group B. Which is presumably a result of the fat-burning effect that released corresponding hormones induce in large quantities with prolonged constant use of the psychoactive substances (at least 7 days in a row). Also, a result of dimethylbiguanide liponiveling effects due to the activation of 5-amp-activated protein kinase, which stimulates the oxidation and lipolysis of fats, is also a consequence of mephedrone use.

A statistically significant change in the glycemic profile and the formed insulin resistance in group B is one of the negative effects of long-term mephedrone intoxication. Theoretically, the main mechanism for increasing glucose levels with the presence of metabolic disorder and mephedrone use is enhancing the effect of catecholamines on gluconeogenesis by changing the transcription rate of genes encoding the corresponding enzymes (glucose-6-phosphatase, hexophosphate isomerase). Already existing peripheral insulin resistance with the use of mephedrone together lead to a spasm of the microcirculatory vessels with subsequent intracellular changes in the normal physiological functionality of the main insulin-dependent tissues, mainly fat and hepatocyte, with a decreased receptor response to insulin and impairment of glucose transport. With an already existing impaired control-reaction of the pancreatic islet tissue, mephedrone use causes an increase in hyperglycemia due to interference in feedback for B-and A-cells and a decrease in the controlling effect of insulin and glucagon in blood plasma. 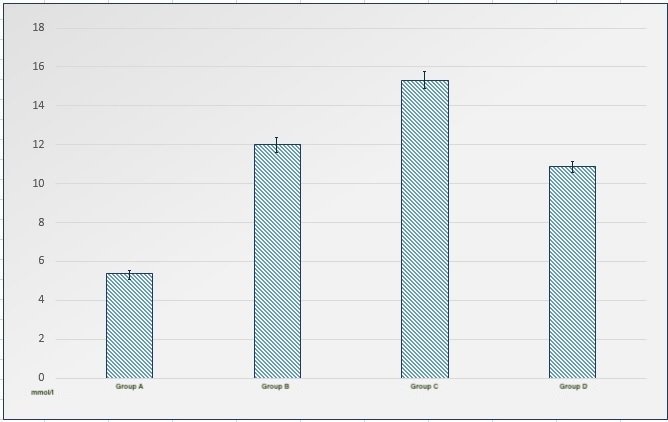 Therefore, a theoretical model of the mechanism of hyperglycemia increase in presence of an existing metabolic disorder and mephedrone use may involve a change in catabolic processes in peripheral tissues with an increase in the substrate for gluconeogenesis and an increase in the formation of glucagon, and in a likely decrease in insulin synthesis, GLP-1 activity and an imbalance in the functionality of Katp-channels. On the other hand, the influence of a numerous catecholamines can regulate hyperglycemia through a certain effect on the cells of the hypothalamic-pituitary system through secondary systems, changing the differentiation of preadipocytes, the growth function of free fatty acids in plasma and the effect of NPY on the corresponding systems. It is impossible to ignore the role of monoamine system of action, so, the blockade of certain 5-HT receptors leads to the suppression of neurotoxic and insulin-like effects, stimulation of protein kinase-A, phosphorylating the insulin receptor, reducing tyrosine kinase and, as a result, increasing the level of glucose in the blood. 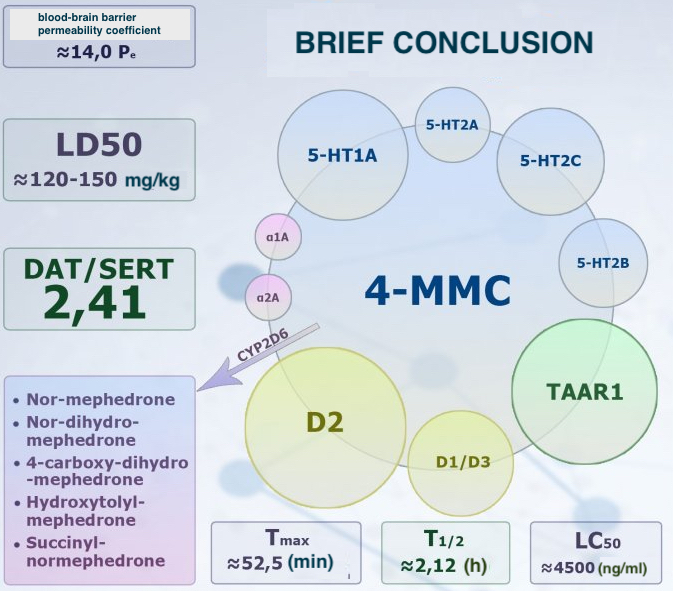 An increase in ALT levels in groups A (68.0 u/L) and C (74.9 u/L) is likely associated with a decrease in the cell membrane's stability, an increase in permeability in presence of a glucose-alanine bridge. Considering certain pharmacokinetic parameters of 4-mmc, the hepatotoxic effect is also manifested by an increase in aminotransferases, which must be considered in presence of chronic liver diseases. Thus, the main cytochrome is CYP2D6, which is responsible for the metabolism of phase I, as a result of which the main 4-mmc metabolites are formed: nor-mephedrone, dehydromephedrone, 4-carboxymephedrone, succinyl-normephedrone. Considering the phenotypic allelic difference in the variation of this p450, it can be concluded that people with low functionality of the enzyme are more susceptible to both negative effects of mephedrone on hepatocytes, and to increased risk of development of severe acute intoxication with hyperglycemic coma. For comparison, in group E, the average number of the ALT index was 34.44 units/l, in group D, this indicator was 64.1 units/l. Despite the results of changes in the level of aminotransferases, the need to use hepatoprotective drugs in people taking cathinones remains debatable and requires additional research. No other statistically significant differences in the biochemical parameters of blood plasma were registered. 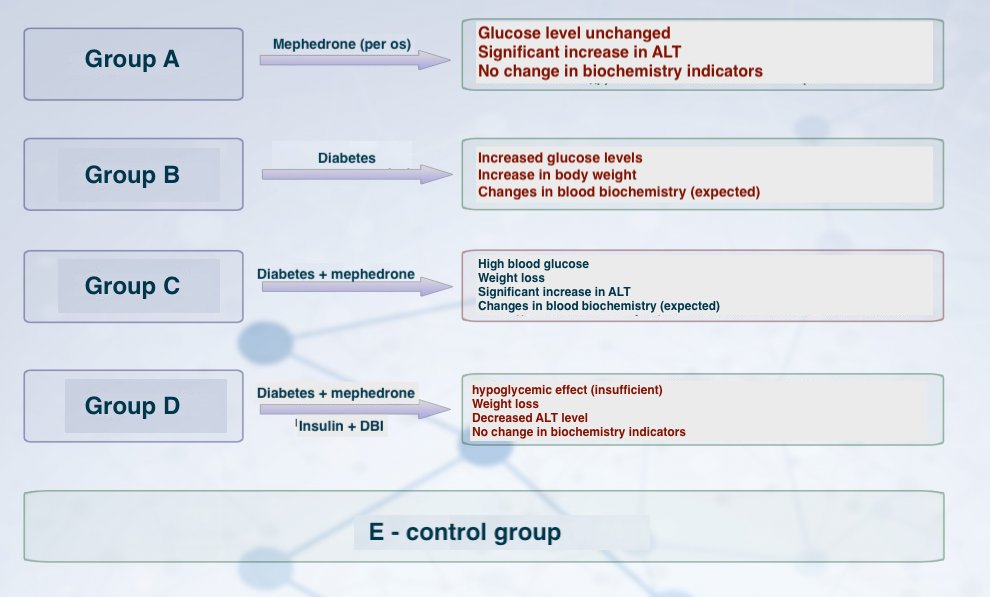 The results of this study revealed a positive effect of hypoglycemic drugs in experimental specimens in presence of a metabolic disorder model and mephedrone use. This is a fundamental point for answering the question if there is a need to continue the course of standard therapy with its possible correction towards increasing the frequency of administration, or doubling the dose. Considering the obtained data, we can assume that mephedrone use, theoretically, does not contribute to the development of metabolic disorder. However, it increases the severity of the symptoms of diabetes mellitus, disrupts the work of the controlling and compensatory systems for regulating the glycemic profile, impairing the effectiveness of pharmacological therapy.