UR-144 (1-Pentyl-1H-indol-3-yl)-(2,2,3,3-tetramethylcyclopropyl)-methanone - is an agonist of cannabinoid receptors, which belongs to a new class of synthetic cannabinoids. It was created in 2006 by a company, Abbott Laboratories as a substance with high binding affinity to СB2-receptors (1.8 nM) and with low affinity to CB1-receptors (150 nM). It is also known by other names (or is included in a combination of substances with the following names): ТМСР-018, K2, Spice, КМ-X1, MN-001, YX-17. Initially, it gained popularity as a “legal” alternative to classic cannabis in countries where its use wasn't controlled. It was first found in herbal incense seized in June 2012 in Korea. After that, it rapidly spread all over the world: Europe, Japan and the USA. UR-144 use was a way around new laws on drug control. According to Chief Sanitary Inspector report, UR-144 was the most popular new psychoactive drug (NPS) on drug market in Poland in the period of time from 2013 to 2014. To this date, according to EMCDDA data, UR-144 has been detected in seized products in Latvia, Croatia, Spain, Denmark, Belgium, Germany, France, Slovenia, Turkey, United Kingdom, Sweden, Hungary, Norway, Poland, and Finland. According to European Drug Report data, UR-144 was one of the most often seized synthetic drugs in 2015. Nowadays UR-144 is a controlled substance in DEA Schedule I. The melting point of this substance is about 68 °C, and the boiling point is about 426 °C at a pressure of 760 mmHg, solubility of 30 mg/ml in ethanol, DMSO and dimethylformamide. It is most often used in a mix with tobacco and herbs, or it is administered orally or in a form of inhalation at a starting dose of 0,5-2 mg. The dose range is from 2.5 to 20 mg. Synthesis of TMCP-indole (UR-144 intermediate). 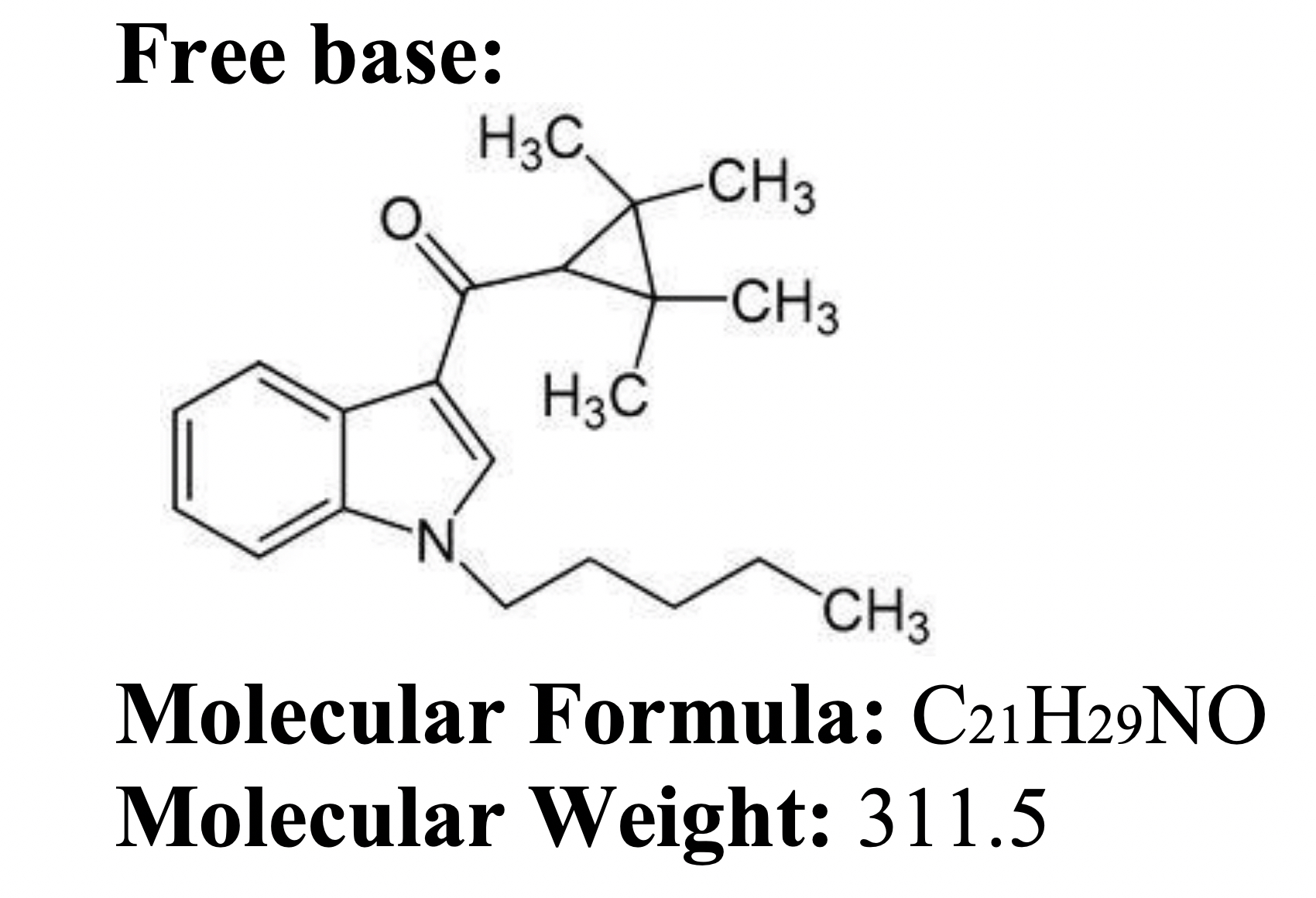 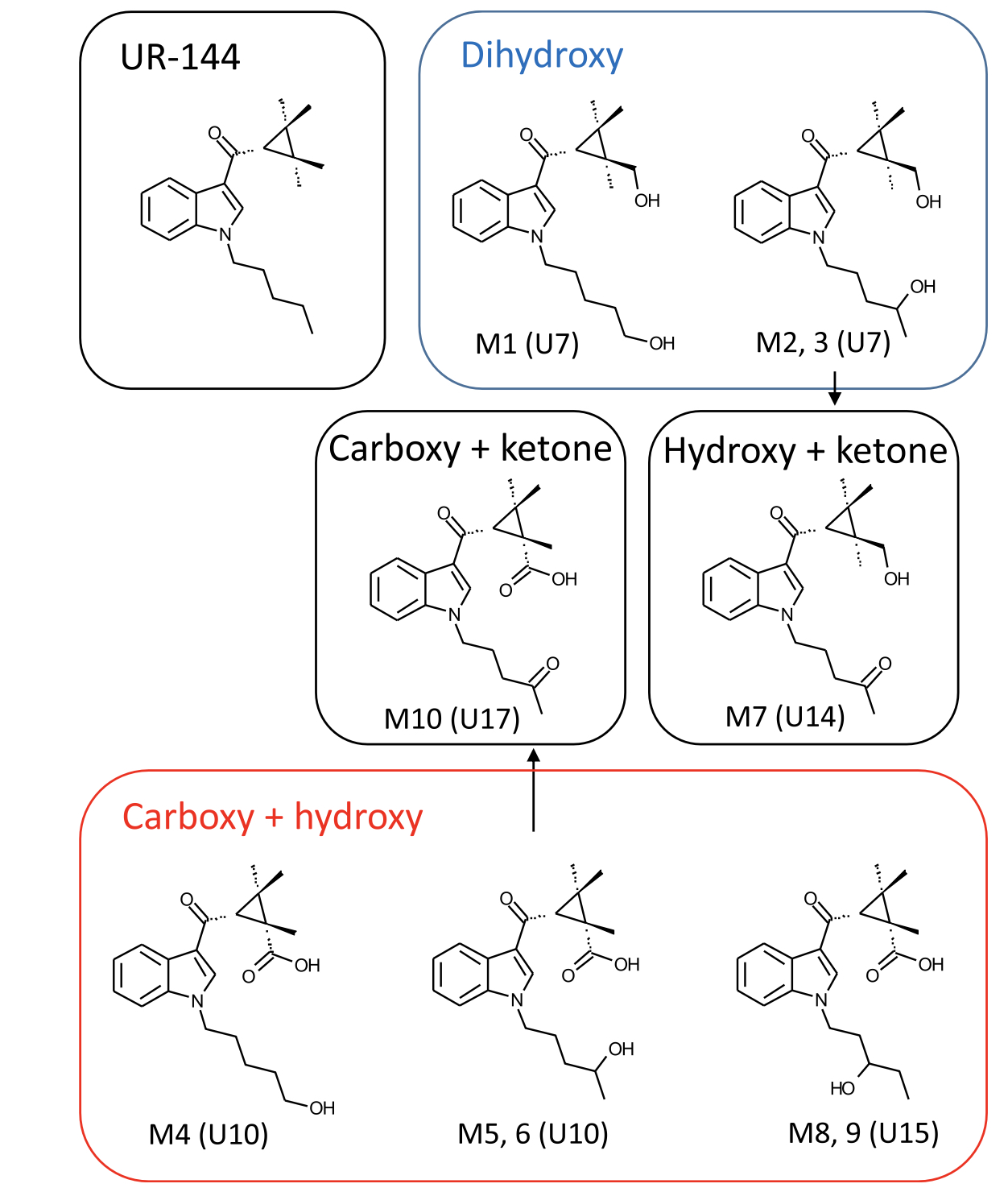 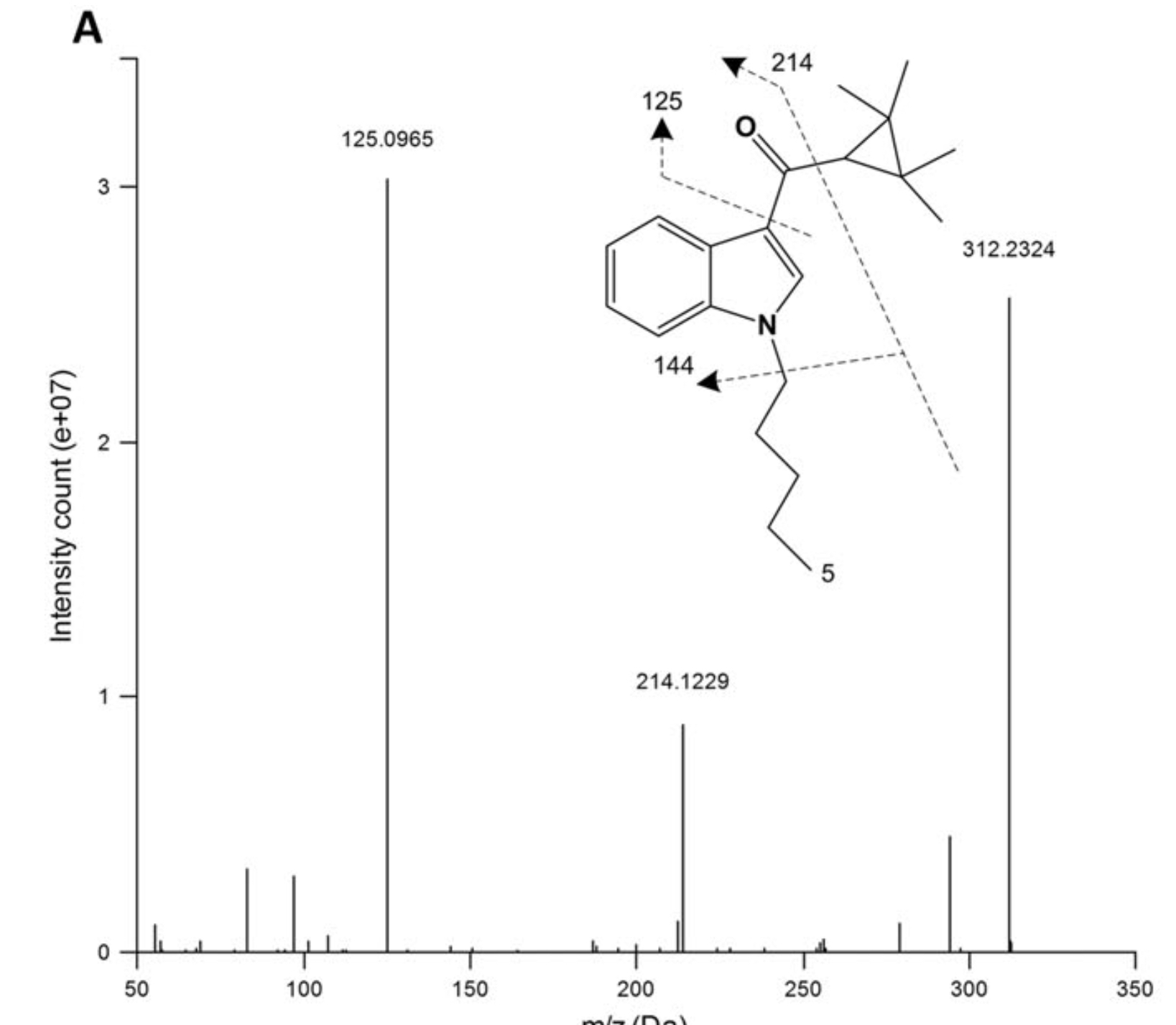 Considering that CB1 is mainly localized in the central system, and CB2 is mainly localized in cells associated with the immune system (macrophages, lymphatic system), after CB1 activation by THC or SCRAs, among other things, there is a release of neurotransmitters in many inhibitory and excitatory synapses of the brain, mediated through the G-protein system. This ultimately leads to a decrease in cAMP and a decrease in the activity of cAMP-dependent protein kinases. Studies of Wiley have proven 83-fold selectivity of UR-144 binding to CB2-receptors by identifying the displacement of radiolabeled agonists [3H]CP-55,940 from this type of receptor, Ki = 28.9 nM, according to The US Drug Enforcement Administration (DEA).

Although UR-144 selectivity to CB2-receptor is at least 6 times higher, its binding affinity to CB-1 is 1,4 times higher, than that of THC. Nevertheless, UR-144 value of CB1 Ki is relatively low (1.4 nM), compared to its analogs e.g. JWH-01. In studies on mice, UR-144 had a dose-dependent effect as a full agonist of these receptors, which was easily blocked by cannabinoid antagonist – rimonabant. The effects included antinociception, catalepsy, hypothermia and inhibition of loco motor activity for example, loco motor activity in mice was depressed depending on time and dose of UR-144 with ID50 7.8 mg/kg. Maximum concentration of the substance is reached 18-24 minutes since intake. Potential median lethal dose is assumed to be indicators from 0.65 to 2.25 mg/kg, but no studies have been conducted. In studies on human embryonic kidney cell line (HEK-293), which expresses CB2 receptors, UR-144 demonstrated effects as a full agonist, involving the mobilization of calcium ions with a maximum molecular response of up to 93%. By means of a functional analysis that determines the change in CB-1 intracellular levels ([3H]Win55-212-2) and CB-2 agonists ([3H]CP55-940), UR-144 inhibits internalization for both types of receptors with indicators IC50=27.2 and 83.6, respectively. This indicated 3 times selectivity to CB-1 compared to that of THC. Pyrolyzed form of UR-144 has a greater agonistic activity on CB1 receptors compared to unpyrolyzed UR-144, which indicates that heating of synthetic cannabinoids, containing cyclopropyl moiety, during smoking can lead to deeper pharmacological effects on the central nervous system.

Positive desirable effects of this substance include the very effects occurring after THC use: euphoria, moderate relaxation, cheerful behavior, some illusions, and so on. However, considering the fact that UR-144 is a synthetic cannabinoid (and also due to its pharmacodynamics), it has more pronounced side effects, which include: swaying (shaky gait), impaired coordination, increased blood pressure (or a strong decrease) and pulse, aphasia, convulsions, aggressive behavior, slow movements, redness of the conjunctiva, hallucinations, drowsiness, sopor or coma, eyelids twitching, gums bleeding, mydriasis, disorientation, anxiety and paranoia, depression (in post-effects); depersonalization / derealization syndrome occurs rarely. 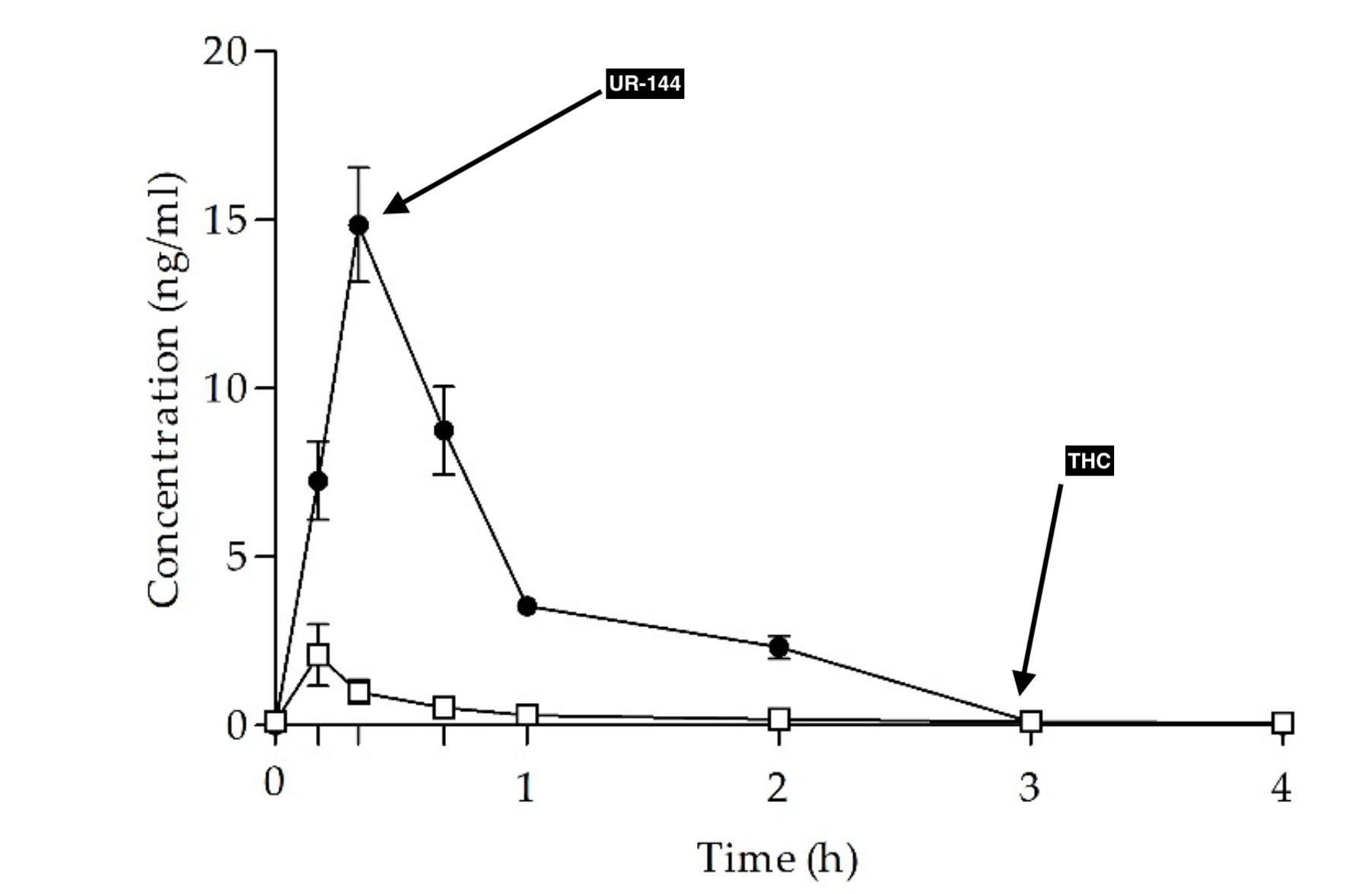 Considering the fact that the most common way of UR-144 administration is smoking, identification of dosage is not possible. However, through the analysis of the research data, it is possible to make a gradation of pure substance doses in terms of THC and CBD percentage in the substance. So, the starting minimum dose of UR-144, which will induce significant and perceptible clinical effects, is 0.05 mg/kg. This indicator can vary depending on various factors and can reach 0.15 mg/kg. The medium doses for this substance have a range from 0.15 to 0.3 mg/kg. Considering a high-risk potential for side effects, it is not recommended administering at a high dose due to complete loss of control over one’s physical and mental state.

Toxicity.
According to Department of Excellence of Biomedical Science and Public Health data, significant indicators of acute toxicity are registered in patients using UR-144, including moderate increase in blood pressure (SBP and DBP) and HR, similar to what happens due to cannabis use. The onset of effects on the cardiovascular system functioning begins after 5-10 minutes and lasts for 1 hour. So, low psychotropic activity encourages the use of high doses of the substance, which can lead to potential acute toxicity effects: confusion and severe dizziness, nausea and vomiting. In general, toxic effects include: tachycardia, nausea/vomiting, drowsiness, mydriasis and hypokalemia. Less common are symptoms such as reduction or absence of pupillary reflex to light, agitation, dizziness, paresthesia, aphasia, muscle twitching, generalized convulsions, myoclonia, hypopnea with hypoxemia and aspiration with acute respiratory failure of varying degrees; most symptoms go away on their own within a few hours. There is also data on a case of acute renal injury after single use of UR-144 in high doses, which may indicate potential nephrotoxicity.