The effects which occur during the offset of a stimulant experience generally feel negative and uncomfortable in comparison to the effects which occurred during its peak. This is often referred to as a "comedown" and occurs because of neurotransmitter depletion. Its effects commonly include: 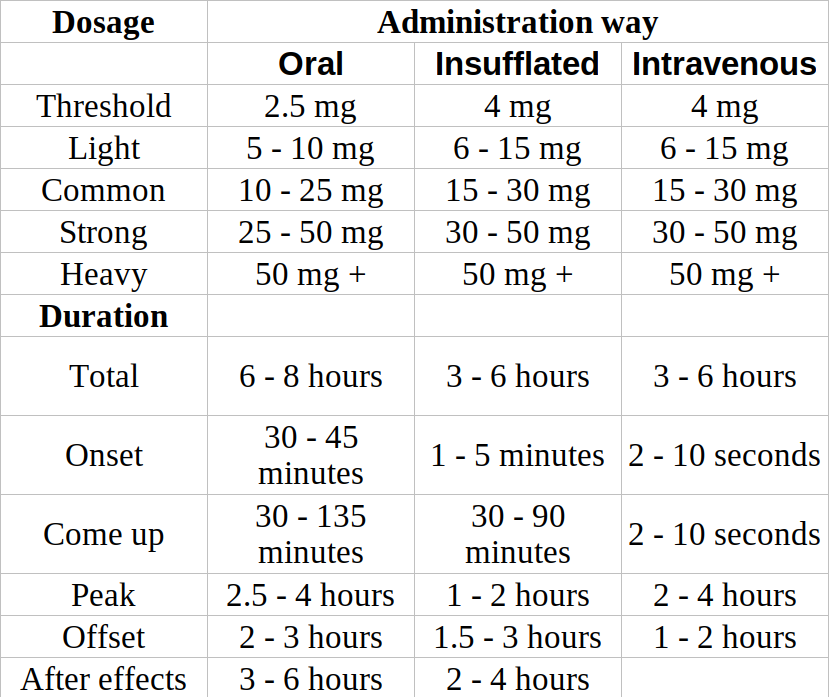 Amphetamine exerts its behavioural effects by increasing the signaling activity of neurotransmitters norepinephrine and dopamine in the reward and executive function pathways of the brain. The reinforcing and motivational effects of amphetamine are mostly due to enhanced dopaminergic activity in the mesolimbic pathway.

The euphoric and locomotor-stimulating effects of amphetamine are dependent upon the magnitude and speed by which it increases synaptic dopamine and norepinephrine concentrations in the striatum.

It is a potent full agonist of the trace amine-associated receptor 1 (TAAR1) and interacts with vesicular monoamine transporter 2 (VMAT2). Combined action on TAAR1 and VMAT2 results in increased concentrations of dopamine and norepinephrine in the synapses, which stimulates neuronal activity.

The exact bioavailability of amphetamine is not known, but it is believed to be over 75% by mouth, and higher by injection or intranasal administration. Its absorption and excretion may be pH dependent. As it is a weak base hence the more basic the environment the more of the drug is found in a lipid-soluble form and the absorption through lipid-rich cell membranes is highly favored. The peak response of amphetamine occurs 1-3 hours after oral administration and approximately 15 minutes after injection. Complete amphetamine absorption is usually done after 4-6 hours. The basic form is more readily absorbed in the intestine and less readily removed by the kidneys, potentially increasing its half life. It is removed by the kidneys via excretion and a small amount is removed by hepatic enzymes. 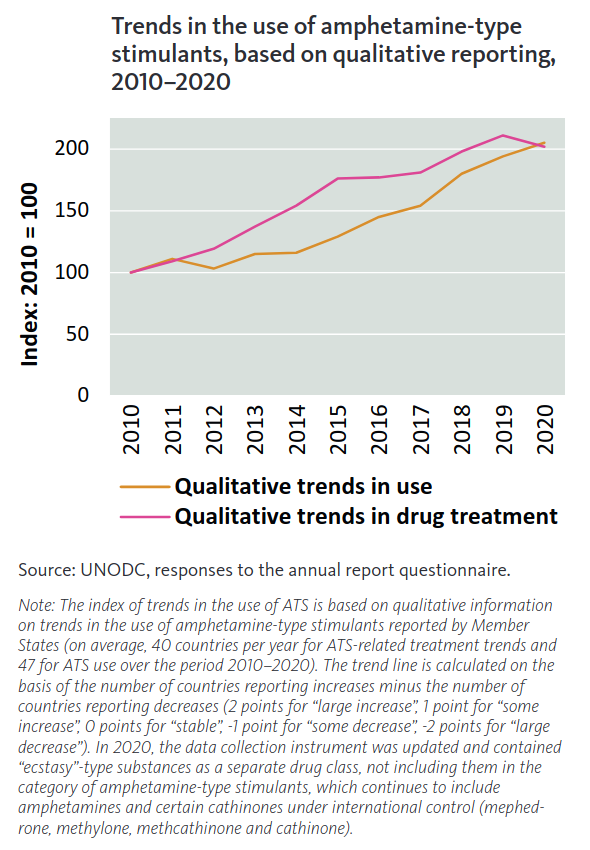 Use of amphetamines continued to rise but signs of decrease in demand for treatment in 2020. Primarily on the basis of self-reported responses to general population surveys, a total of 34 million people aged 15–64, or 0.7 per cent of the global population, are estimated to have used amphetamines in the past year, and 20 million (0.4 per cent) are estimated to have used “ecstasy”-type substances. Some of those users had used both types of substances. The two most commonly used amphetamines are amphetamine and Methamphetamine.

The global estimate of amphetamines use was similar in 2010, with 33 million past year users or 0.7% of the population aged 15-64. However, these estimates have to be interpreted with caution owing to the lack of data from major consumer countries in Asia where other market indicators, such as seizures and prices, suggest an expansion over the last decade. Qualitative information based on perceptions of trends reported by national experts to UNODC shows a continued increase both in terms of the use of amphetamines and the number of people in treatment for amphetamines over the past decade. However, data for 2020 show that this increasing trend has paused and that the number of people in treatment for amphetamines may have decreased, consistent with an overall decrease in treatment as a result of the COVID-19 pandemic. e Trends derived from such qualitative information are consistent with the available supply indicators, such as prices and seizures, which indicate continued global expansion of the market for amphetamines. Qualitative information of this type suffers from methodological limitations, but it has an advantage in that it takes into consideration small-scale studies and expert observations regarding countries where drug use surveys are not regularly implemented. Qualitative information on trends in the use of “ecstasy” was reported under different categories by countries before the implementation by UNODC of its new data collection tool (the updated annual report questionnaire, which came into use in 2020), thus qualitative reports of trends in “ecstasy” use are limited to the period 2019–2020. These reports suggest a moderate increase globally. At the same time, studies from countries where “ecstasy” is used in recreational settings suggest that the use of “ecstasy” declined more than any other drug during the pandemic in those countries. Wastewater analysis, while limited in geographical coverage to Europe, North America and some parts of Asia and Oceania, also suggests that the use of “ecstasy” declined between 2019 and 2020 more than the use of amphetamines. In the majority of analyzed locations, increased levels of consumption of MDMA were identified, while in a slight majority of those locations, increased amphetamine use and decreased Methamphetamine use were detected. Early wastewater analysis data from 2021 suggest an overall increase in amphetamine consumption in the majority of locations monitored by the Sewage Analysis CORe group, most of which are in Europe, between 2020 and 2021; an increase and a decrease in Methamphetamine consumption in about the same number of locations; and a continuous decrease in MDMA consumption in a large majority of locations.